Pre operative Xray templating has always been important in planning the appropriate sized implant in total hip replacement to minimise the risk of post operative issues such as leg length inequality, prosthesis dislocation and gluteal abductor muscle dysfunction. Xrays alone have limitations. They are 2 dimensional image and templating was dependant on the magnification of the Xray being accurate.

OPS has become an extremely accurate tool to assist with such planning. This system evolved from trying to determine what caused ceramic on ceramic bearing hips to “squeak”.

After collecting and analysing a considerable amount of data it became evident that the positioning of the femoral head within the acetabular cup ( ie the articulation of the joint) was highly dependent on the position of the pelvis during functional movements of the hip joint. Pelvic inclination /position varied between patients and this had an impact on whether the femoral head tended towards edge loading or frank dislocation. Edge loading causes squeaking in ceramic on ceramic bearing surfaces or premature wear of poly insert in ceramic/metal on poly bearing surfaces. OPS is able to accurately plot where the femoral head articulates within the acetabular cup and provide the optimal positioning of the acetabular cup for that particular patient. Theoretically this will decrease the risk of dislocation and/or premature wear and early failure of the implant.

OPS has now evolved to also provide accurate information about the morphology of the femur, because of the 3D CT reconstruction imaging software, and this can be used to predict the size and most appropriate femoral implant for the shape of patient’s femur.

Hip replacements have traditionally been very successful operations to relieve patient’s pain and improve their function, with minimal complications. This type of technology has provided the surgeon with a tool to decrease the small number of patients who developed unexpected complications by accurately aligning all components of the hip replacement to the patient’s normal anatomical variability.

Dr Stening adopted this technology early in it’s evolution and now uses it in most cases. He finds it particularly useful for patients with associated lumbar pathology or past history of lumbar surgery as this can have significant impact on pelvic orientation or where there is unusual femoral anatomy from whatever cause. 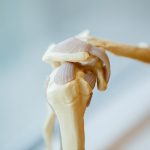 A child’s ACL tear – It’s not just another ACLNews